LET'S TALK ABOUT THIS PAST YEAR

HEL/LO – Let’s Talk hosted Helsinki and London speakers throughout 2012 at four design and architecture discussions, and showed that speaking really is gold. To celebrate the rich life of the HEL/LO series, we have gathered some of the highlights from the months gone by: 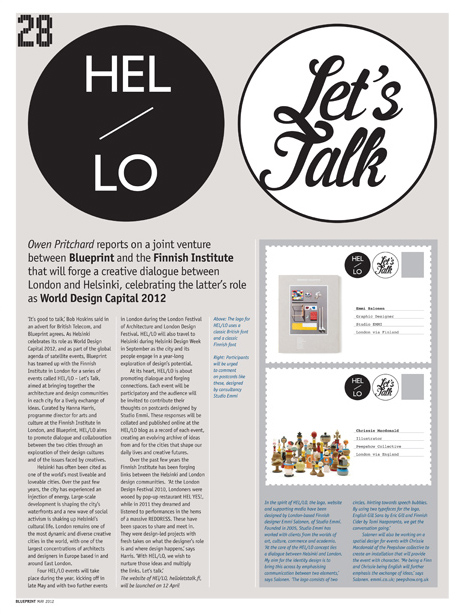 In April, we said “HELLO HELSINKI, HELLO LONDON!” and launched our website, while our partner Blueprint magazine offers a teaser preview in their May issue. 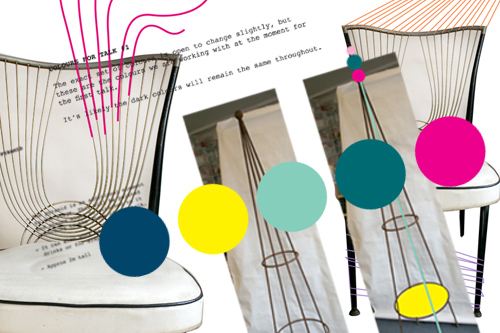 Designers Emmi Salonen and Chrissie Macdonald sent us the preliminary plans for the customised HEL/LO stage. We instantly love the ideas – and the eye candy.

– Owen Pritchard, the series’ co-curator, shares memories from how HEL/LO was born in Helsinki.

The HEL/LO series launched on a beautiful May evening in the steaming hot Gopher Hole basement in Shoreditch, London. HEL/LO – Let’s Talk About Dreams demonstrated that it can be important to think the impossible in order to start something new – and to actively share your dreams with the people around you. 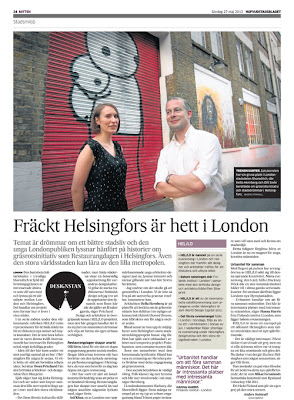 "HEL/LO is a great example of a proactive Helsinki that greets the world with a new sense of self-confidence."

After the first HEL/LO talk, one of the Finnish newspapers Hufvudstadsbladet commented on our event.

While London prepared for the biggest sporting event of the year, we launched the theme for our second HEL/LO talk – games – and asked Martti Kalliala to elaborate on the relationship of games and cities:


“Games and the processes that constitute the building and existence of a city are not only analogous but in fact share similar structures and organizing principles.”

In preparation of the second talk, we were treated to a glimpse behind the scenes of the HEL/LO designers.  We were absolutely thrilled to learn that the interview meant we would also capture what might be London’s most colourful workspace.

Our second discussion HEL/LO – Let’s Talk About Games, held at the fantastic new arts venue White Building in Hackney Wick, discussed the relationship between cities, public space and games. It touched on the politics and economics of design, while discussing what it means to be serious about being silly... 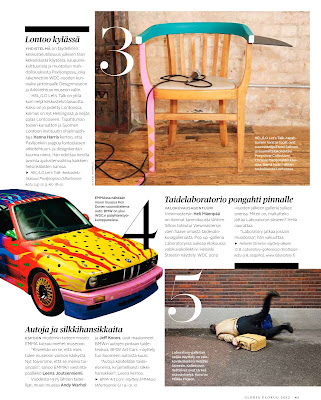 In August, we released the details for the last two HEL/LO talks, the first of which is to travel to Helsinki during Helsinki Design Week in September. The Finnish magazine Gloria greets our Helsinki event with open arms and calls our choice of theme and venue “a perfect mix”. Our HEL/LO 3 venue, the Pavilion, also attracted the attention of the British press.

With two talks at two major design events in Helsinki and London, HEL/LO – Let's Talk really did have an exciting September.
HEL/LO – Let’s Talk About Alternatives brought the discussion to Helsinki 12 September, during Helsinki Design Week. We talked about alternative ways of thinking and doing in design, and drank hot autumn toddies.

A week later our designers set up the custom-made HEL/LO stage for the last time at designjunction, one of London Design Festival’s main venues. The fourth and final discussion HEL/LO – Let’s Talk About Tomorrow turned out to be a feisty exchange of ideas.

Blueprint magazine’s editor Johnny Tucker, who moderated the talk, sums up the night aptly:
“Tuomas Toivonen burst into song and Rachel Armstrong treated us to a discussion of a metaphysical chicken. And that was just for starters – the discussion that followed and was forthright and extremely entertaining. Who would have predicted that the two Finnish panel members would eventually plump for a vision of the future as envisaged by Nicole Kidman!”


A giant chicken, Nicole Kidman and an impromptu a cappella solo – HEL/LO – Let's Talk About Tomorrow discussed what the future holds for design and architecture, and presented some very surprising elements.

The fourth and final talk took place 19 September at the Old Sorting Office in Bloomsbury, as part of the designjunction preview night program at London Design Festival. 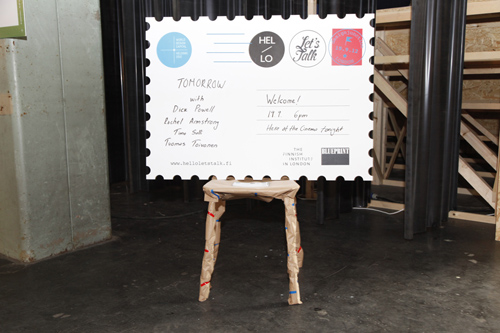 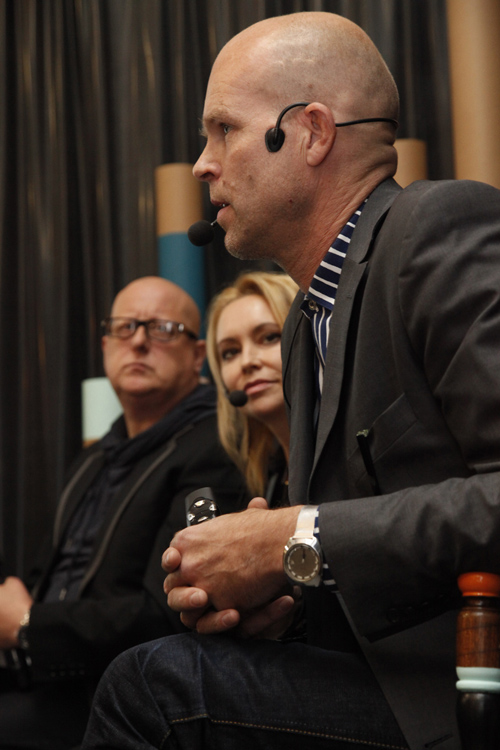 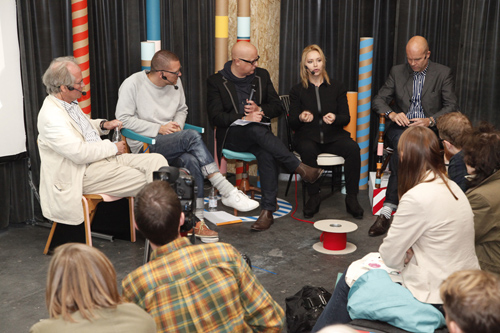 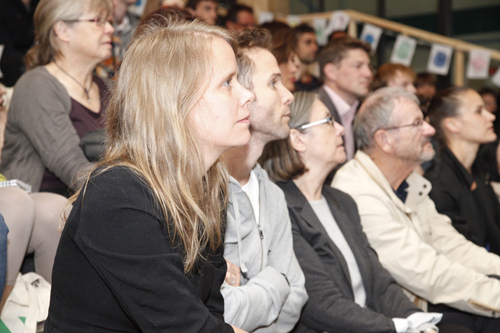 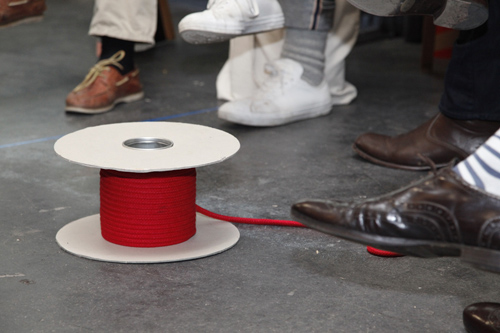 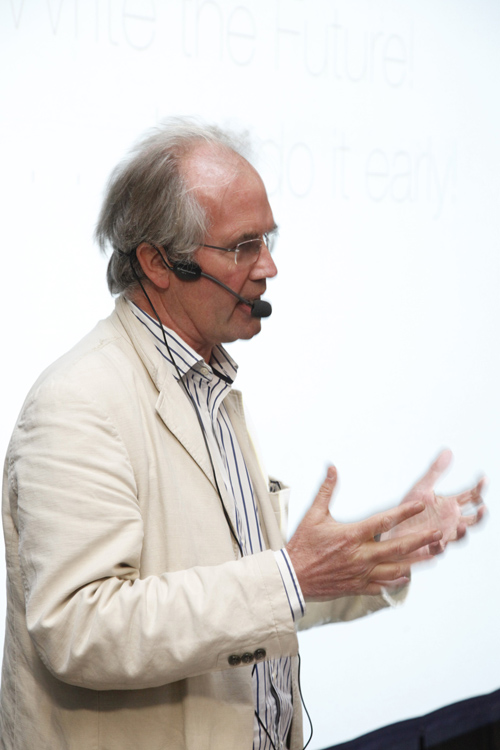 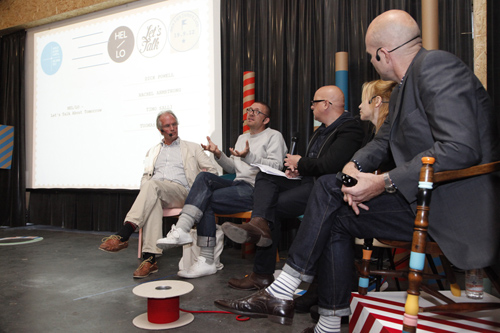 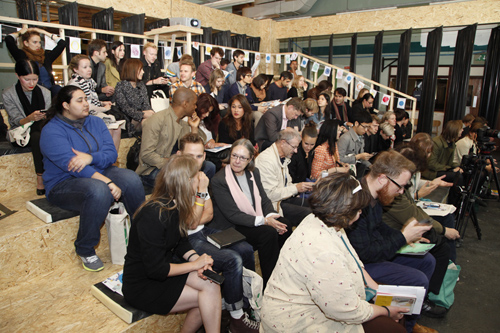 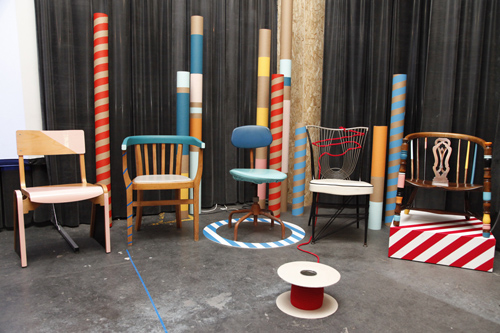 A packed house and great provocations made the fourth and final HEL/LO talk a success. Stay tuned for video footage from the event – including an a cappella surprise!
at 10:55

HEL/LO 3 VIDEO: "WE NEED TO START THINKING IN A NEW WAY"


HEL/LO – Let's Talk About Alternatives from The Finnish Institute in London on Vimeo.

The speakers at the third HEL/LO event included Alex Warnock-Smith, Annamari Vänskä, Krista Kosonen and Sean Griffiths. Get to know them better here. The talk was chaired by Beatrice Galilee. 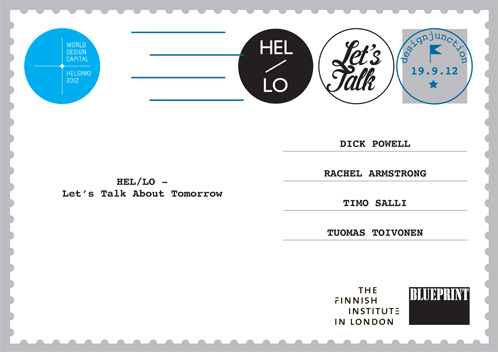 Concluding the series of talks organised by the Finnish Institute in London and Blueprint magazine, the fourth and final event HEL/LO – Let's Talk About Tomorrow will explore the future. Join us on Wednesday and hear these four speakers discuss what the future holds for design and architecture.

Dick Powell is co-founder of internationally renowned design and innovation company Seymourpowell with diverse clients such as Unilever, Panasonic, Tefal, LG, Nestle and Diageo. Dick is the current chairman of D&AD. As chairman, he is a mentor to the team at D&AD and strives to call on the government and business leaders to recognise the value of embedding design and creativity into the DNA of British businesses. Dick has appeared on numerous radio and television programmes alongside business partner Richard Seymour, and has sat on the boards of the Design Council, the Design Business Association and the D&AD Executive. Dick was global design advisor to Samsung Electronics and is currently a member of the International Advisory Panel for Design in Singapore.

Rachel Armstrong is a sustainability innovator who investigates a new approach to building materials called living architecture, which suggests it is possible for our buildings to share some of the properties of living systems. She collaboratively works across disciplines to build and develop prototypes that embody her approach. She is 2010 senior TED fellow, and visiting research assistant at the Center for Fundamental Living Technology, Department of Physics and Chemistry, University of Southern Denmark. Rachel trained as a medical doctor with qualifications in general practice and has also worked as a multi-media producer, a science fiction author and an arts collaborator. Her current research explores the possibilities of architectural design and mythologies about new technology. Rachel is currently collaborating with international scientists and architects to explore cutting-edge, sustainable technologies by developing “metabolic materials” in an experimental setting.


Aalto University, School of Arts, Design and Architecture
Timo Salli is a designer and the professor and head of the applied art and design master’s degree programme in the Aalto University School of Art and Design. Snowcrash, a designer collective to which Timo belonged, had a successful entrant in the Milan Salone furniture fair in 1997. Since being part of Snowcrash, Timo has worked in the fields of product design, exhibition architecture and acted as a curator and producer of design exhibitions. In 2003 the first results of the new applied art and design master’s degree programme led by Timo were shown at the Milan furniture fair: the well-publicised Saunabus. This was followed by the New Dining Luxury and Imperfect Home projects, shown in Cologne and Milan 2004–06, and the most recent Helsinki Hotel (Helsinki and Milan 2007).

Tuomas Toivonen is an independent architect and urbanist. He is the co-founder of NOW, a Helsinki-based multidisciplinary practice operating in the joint fields of architecture, urbanism, strategy, design and communication. During his professional architectural career, he has also worked as a journalist, critic, curator, performing musician, producer and teacher. Together with his partner and wife Nene Tsuboi, they are currently building Kulttuurisauna, a new public sauna and independent cultural centre in Helsinki, that they will own and operate themselves.

HEL/LO – Let’s Talk is a series of four design events taking place in London and Helsinki. It is organised by the Finnish Institute in London in collaboration with Blueprint magazine. HEL/LO is part of the World Design Capital Helsinki 2012 international programme.